The Shagman ® (aka Mike Shanahan) has been writing and performing his original, dry, witty, cheeky style of comedy since 2002. Shagmans stand up routine has been described as different, very funny and a whole new take on comedy.

Shagmans comedy (and Virgin Blue and Toyota) have taken him to Canberra, Adelaide, Melbourne, throughout QLD and some other areas to fantastic responses (sometimes from the audience).

A former radio personality hosting the ‘Shaggis Show’ broadcast between 1994-1998 on The Rock Network, [www.therock.net.nz] New Zealand, Shagman continues to perform his stand up and has recently released his second Comedy EP entitled ‘STILL GOIN’ HARD’.

During Shagmans time in commercial radio his show was very funny and entertaining. People would gather around the radio at 7 pm like it was 1940 (before TV ) all over again, to hear the Shagman. Some to laugh, some to complain, but all for the same reason; to hear what the Shagman would say next. Tapes (yes, tapes) of “The Shaggis Show” found their way to Europe and America (and unfortunately some to management)

A little trivia about Shagman 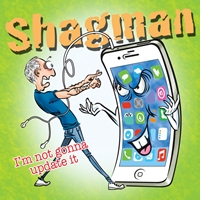 Shagman's parody of Twisted Sisters' track, "We're not gonna take it" entitled "I'm not gonna update it" Click on the artwork above!
The Shagman on Twitter

"You are frankly wrong!"

Daniel Andrews has told off a heckler at a press conference today after he questioned the Premier on vaccine mandates.

A deadly pandemic doesn’t require commercials 24/7 to remind you it exists.